This gallery is to accompany the podcast, 'A Guided Walk along George IV Bridge'.

If you right click on any picture and select 'open image in new tab', or 'view image' depending on your browser, you can see higher resolution images. 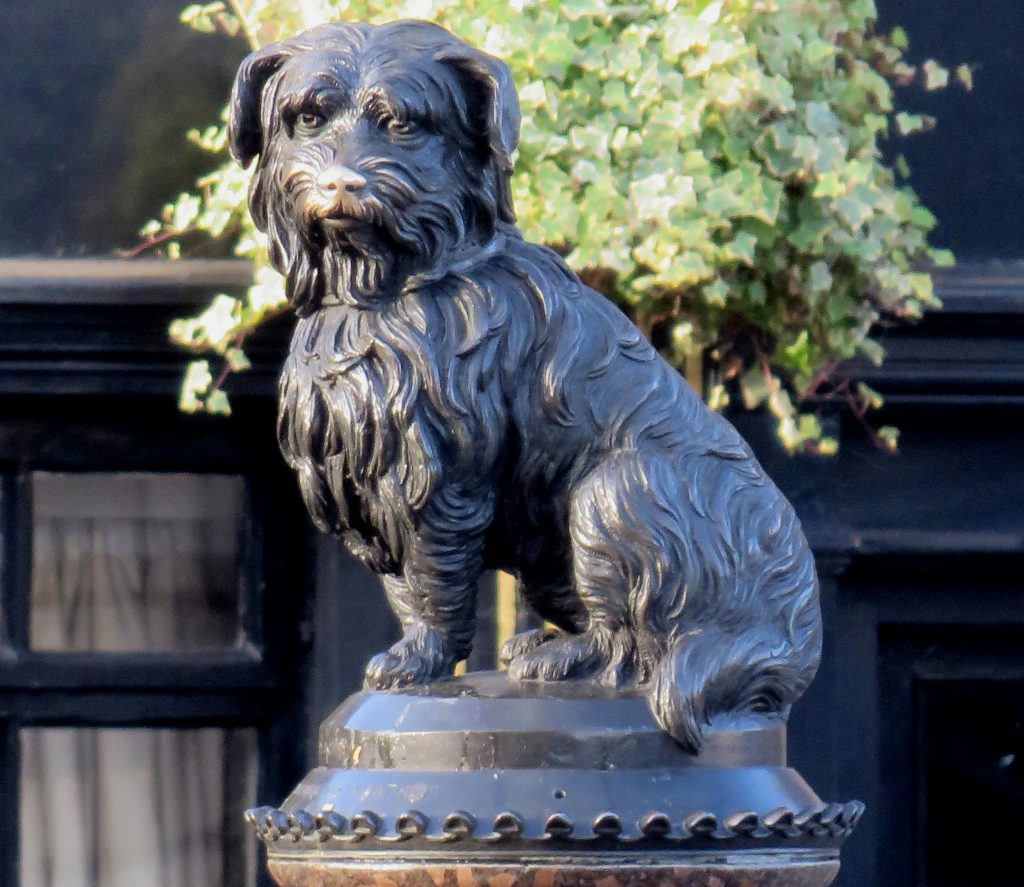 The statue of Greyfriars Bobby at the southern end of George IV Bridge.

The memorial was designed by William Brodie and unveiled on November 15, 1873. 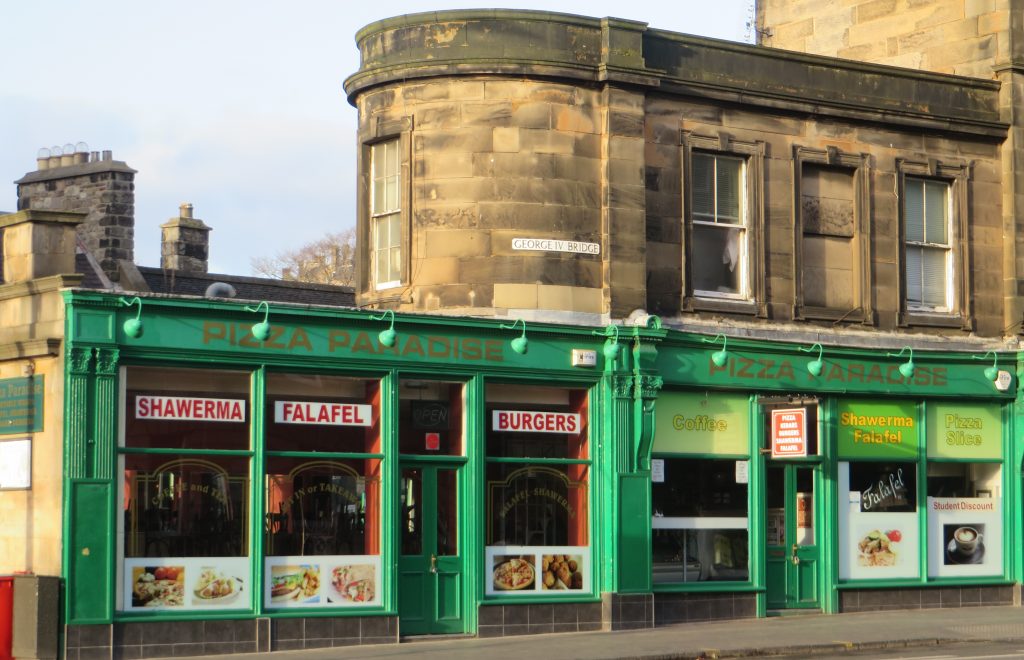 Victorian era shop fronts. The upper, rounded stone portion dates from 1850, the flat-roofed extension from 1857. This was for many years a bookshop. In the Victorian period George IV Bridge was noted for being the home of many publishers and booksellers. 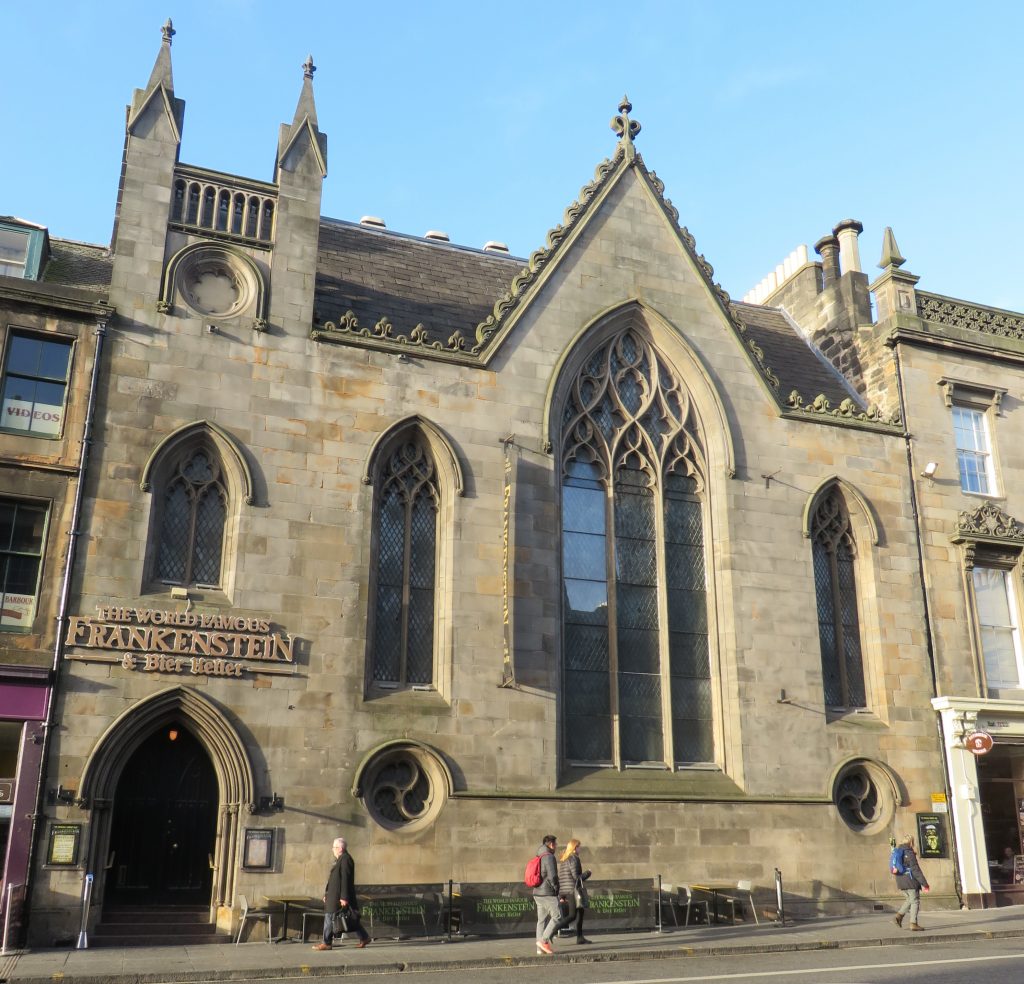 This church was built at the end of the 1850s and started life as the Reformed Presbyterian Church. Over the next 140 years it changed hands several times, always remaining a place of worship, until 1999 when it was de-consecrated. It is now a bar. 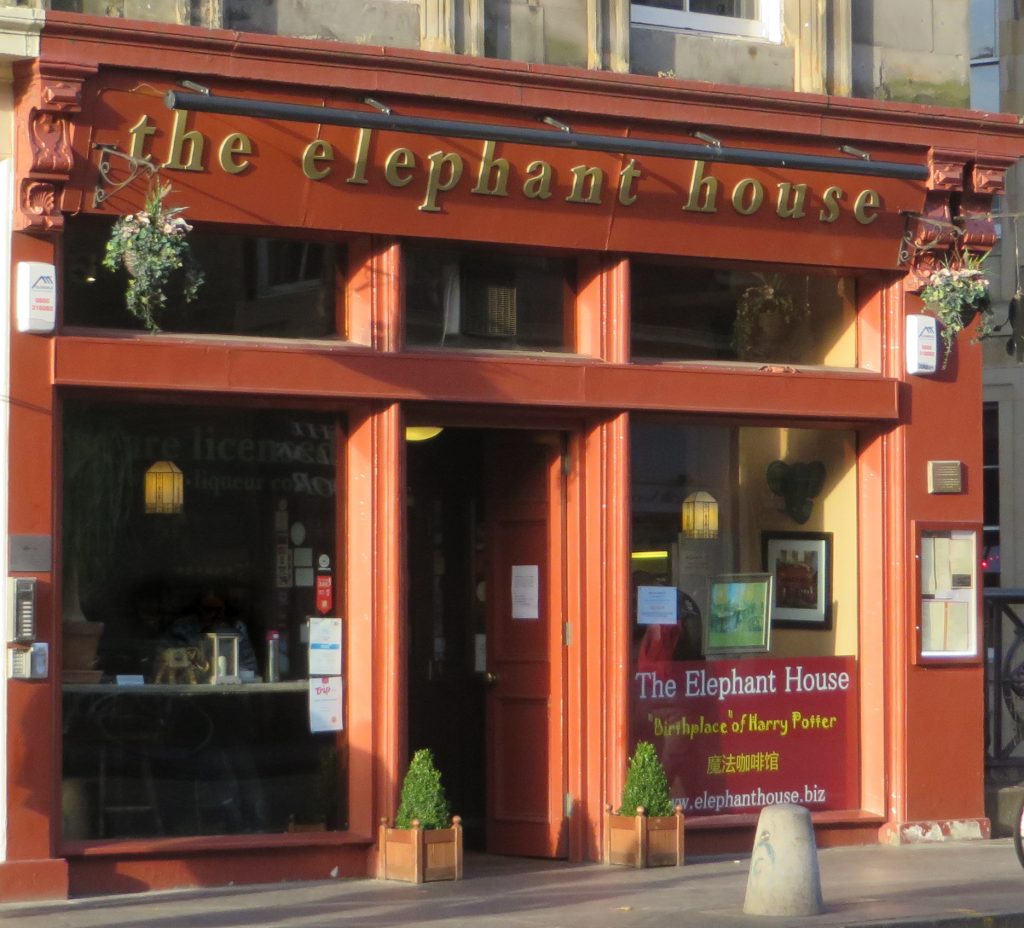 The Elephant House café captured on a rare moment when it was not surrounded by people taking selfies.

The café is now noted as 'The Birthplace of Harry Potter'. 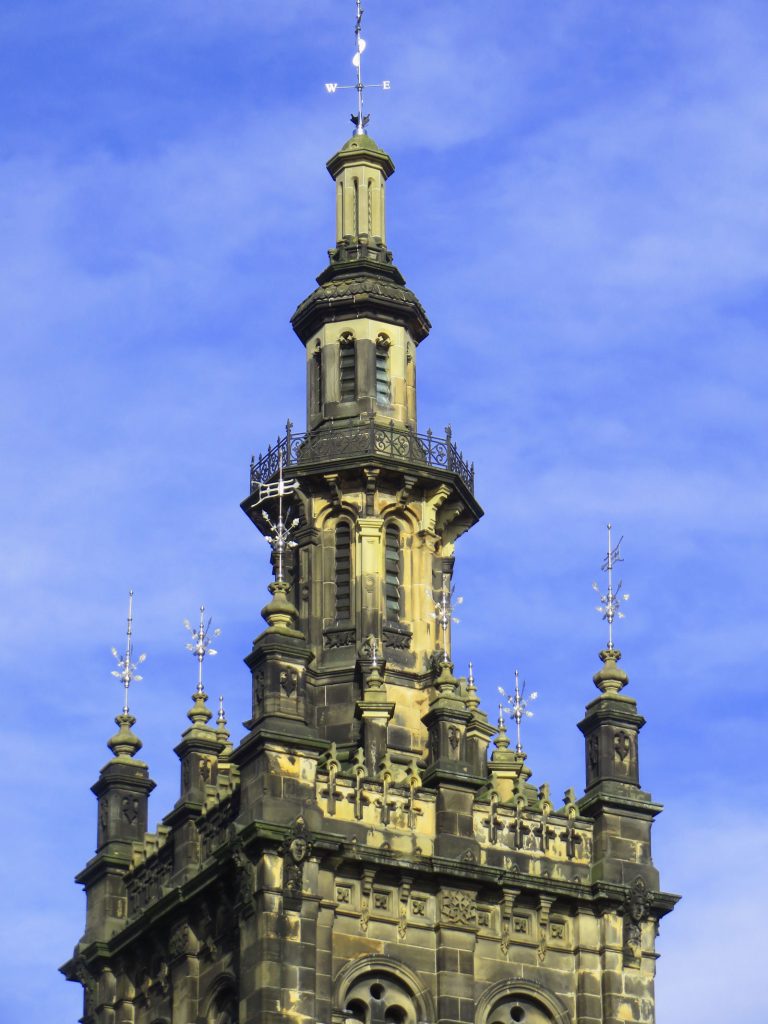 The upper part of the restored tower of the Augustine United Church.
This was first built between 1857 and 1861. It was removed in 1982 but replaced in 2005. 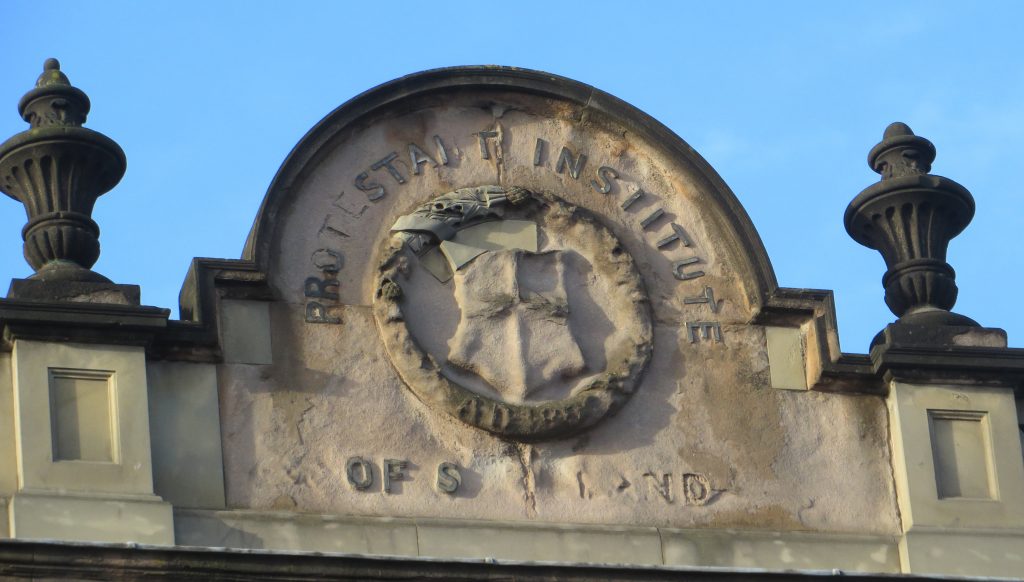 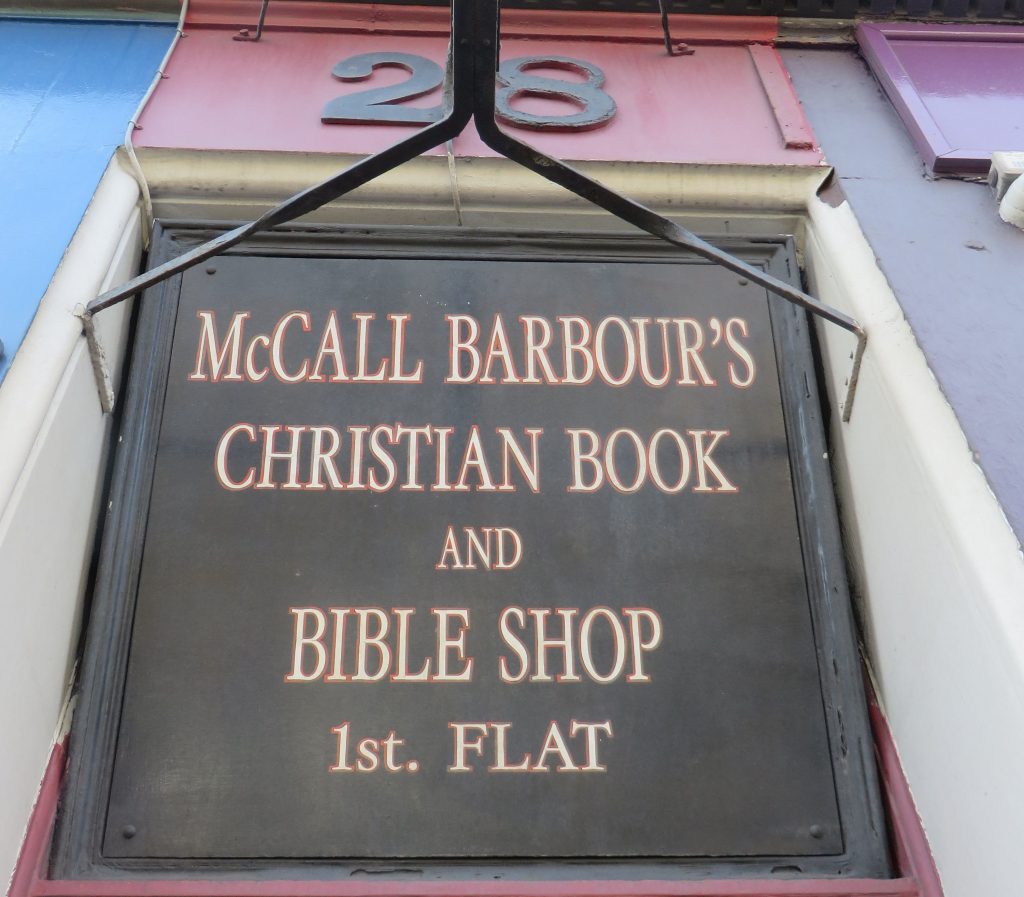 Roofline detail of the Protestant Institute of Scotland. The soft sandstone has worn away over the years and only fragments of the original metal overlay on the shield, wreath and lettering are visible. 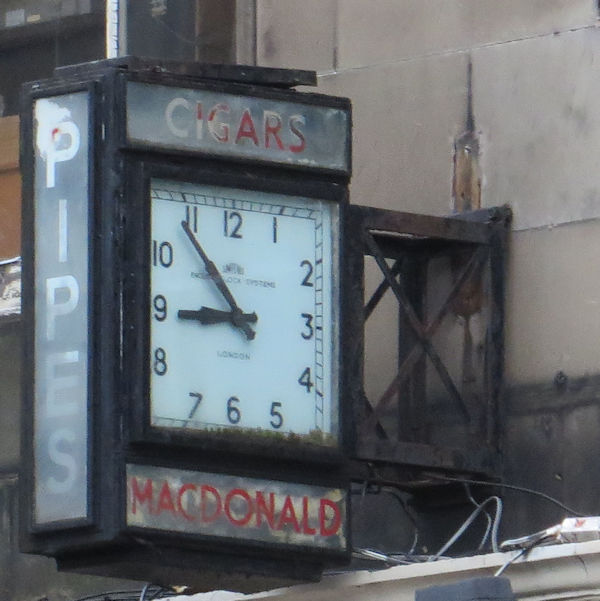 This clock, believed to date from the 1940s, sits above an old tobacconist's shop. Opened by MT MacDonald in 1918, the shop finally closed in 2003. 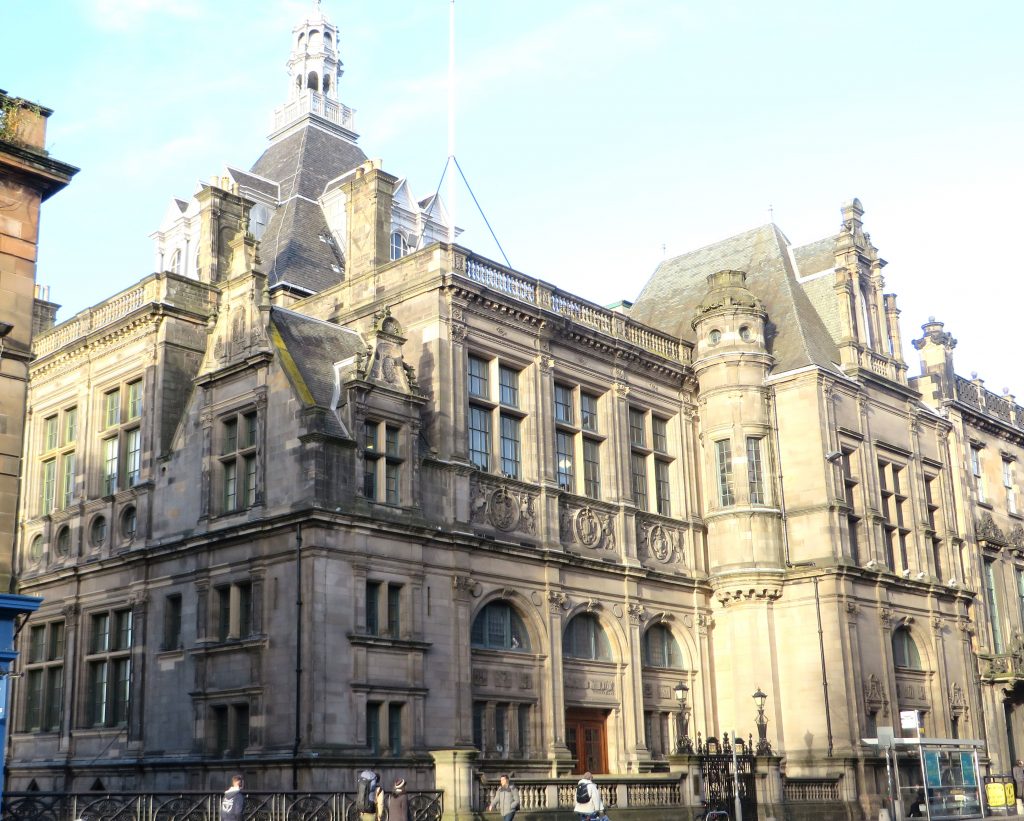 Bust of Andrew Carnegie in the library 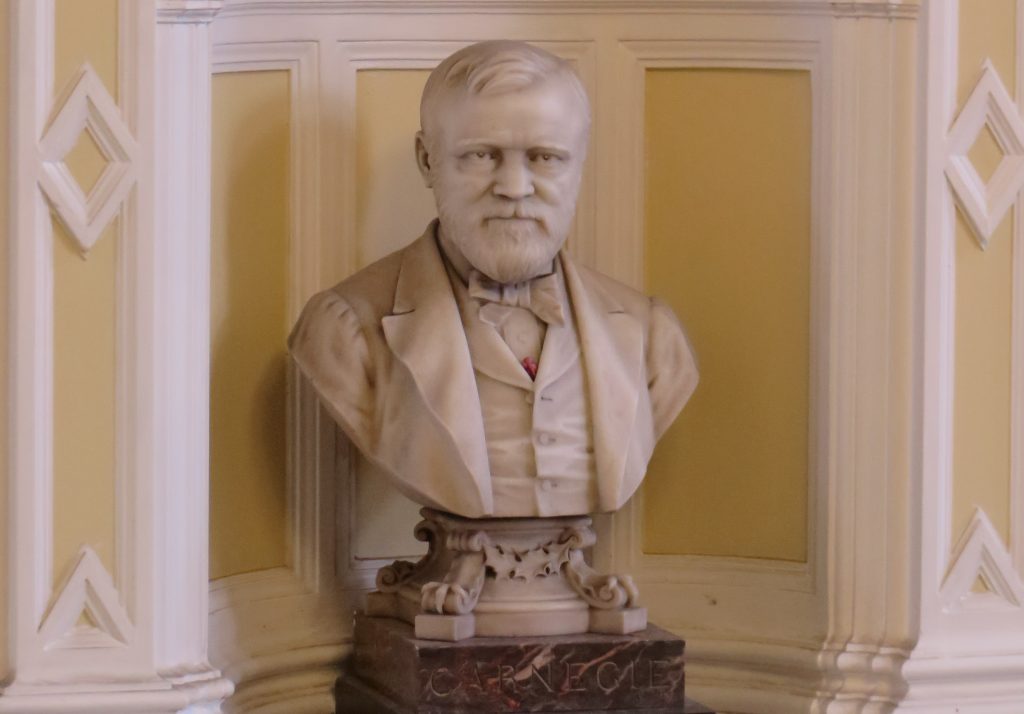 Edinburgh Public Library was built in two phases between 1887 and 1903. If you look carefully, you'll see that the building is set back from the road, ensuring that more light can fall into the building.

Andrew Carnegie originally offered £25,000 to the city, to help build a public library. This was later doubled, in order to overcome local opposition to the idea. 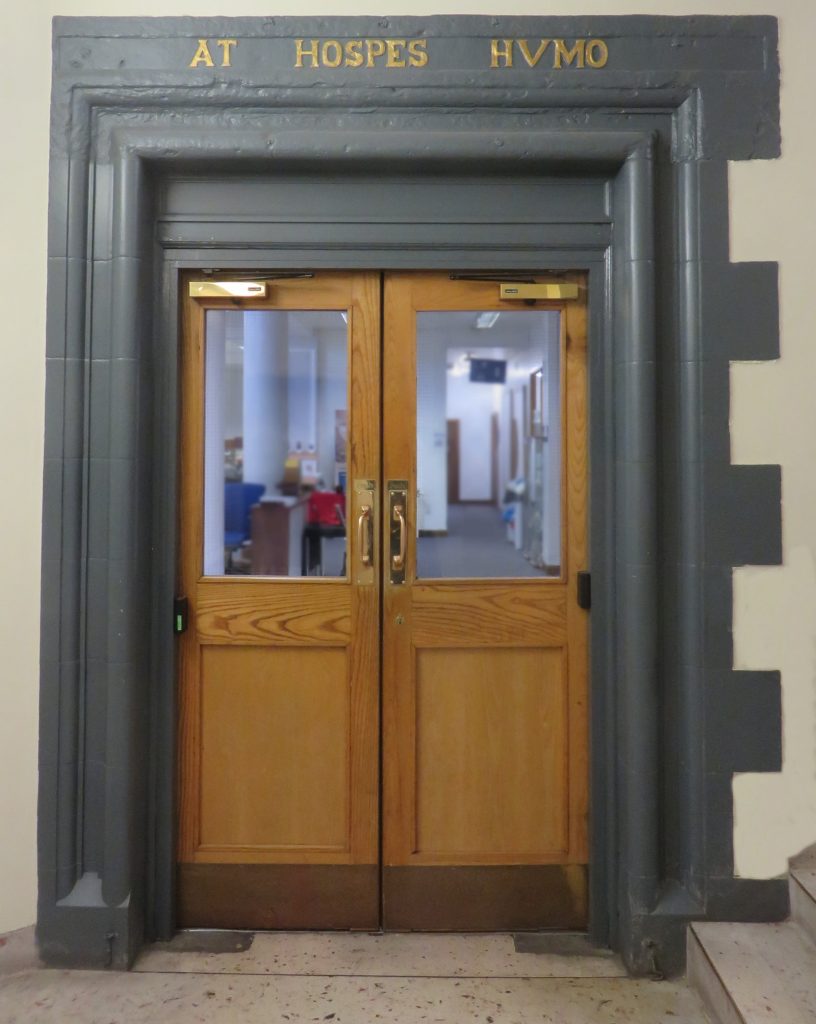 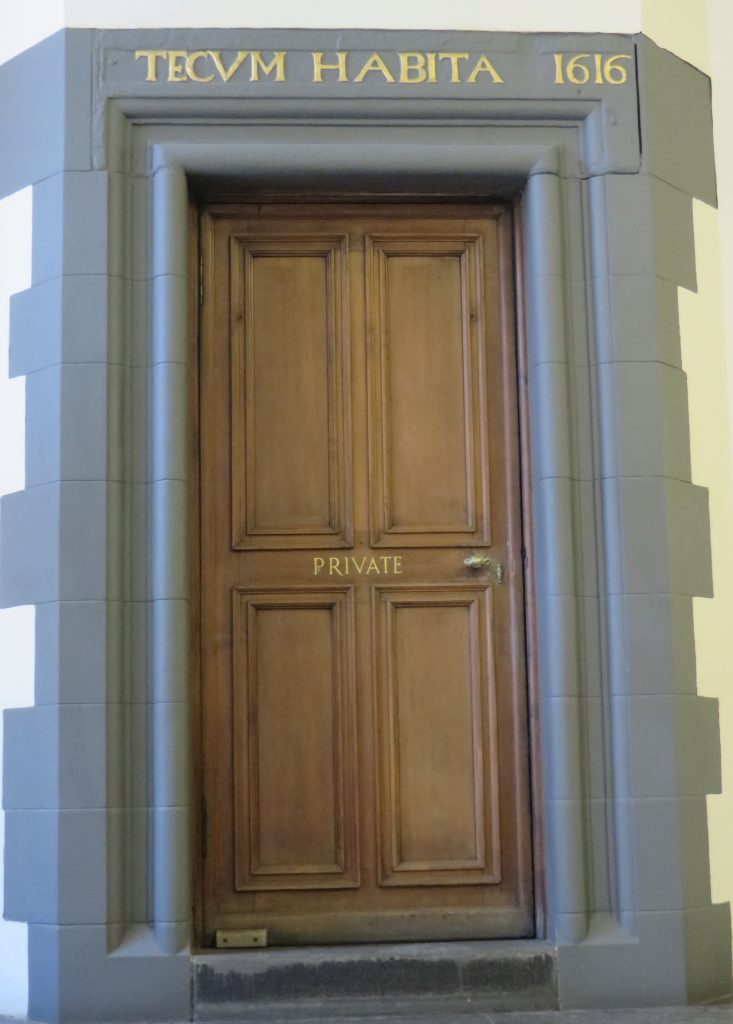 Sir Thomas Hope, Baronet of Craighall was born in 1573, the son of an Edinburgh merchant, Henry Hope and his French wife, Jacqueline de Tott.
In the reign of James VI, he became an advocate and quickly made his reputation in a case where he defended a number of churchmen who had been accused of high treason.
In 1616 he built a house on the Cowgate, on the site of the present Edinburgh City Library. Two lintels from above the doors of that house are incorporated into the library. The lintel in the upper photo carries the Latin motto, AT HOSPES HUMO. This is from Psalm 119, verse 19, which is translated in the (then new) King James Bible as, "I am a stranger in the earth: hide not thy commandments from me." Rather cleverly, it is also an anagram of his name, THOMAS HOPEUS. The lower, TECUM HABITA is from the Roman satirist, Persius and means 'Live with Yourself', or as we might put it, 'Live within your means'.
Sir Thomas had fourteen children and his descendants would go on to be Lords of Session, Baronets of Craighall, Earls of Hopetoun and would also found the bank, Hopes of Amsterdam, that was instrumental in negotiating the Louisiana Purchase.
He died in 1646 and is buried in Greyfriars Kirkyard. 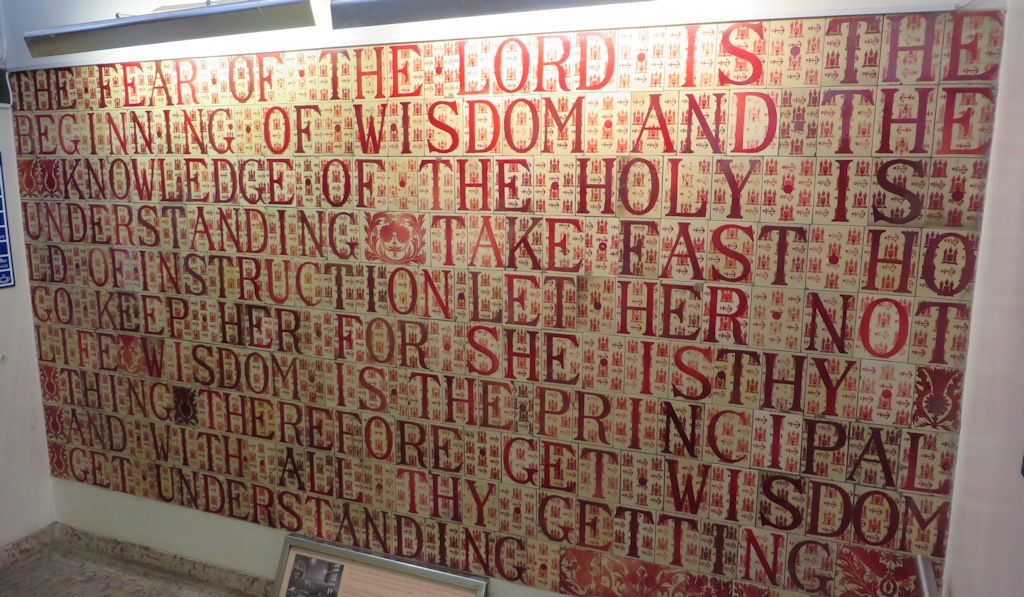 These tiles were originally installed in 1890 as a continuous frieze round the tiled dado of the Newsroom. They were removed in 1958. The text is from the Book of Proverbs. 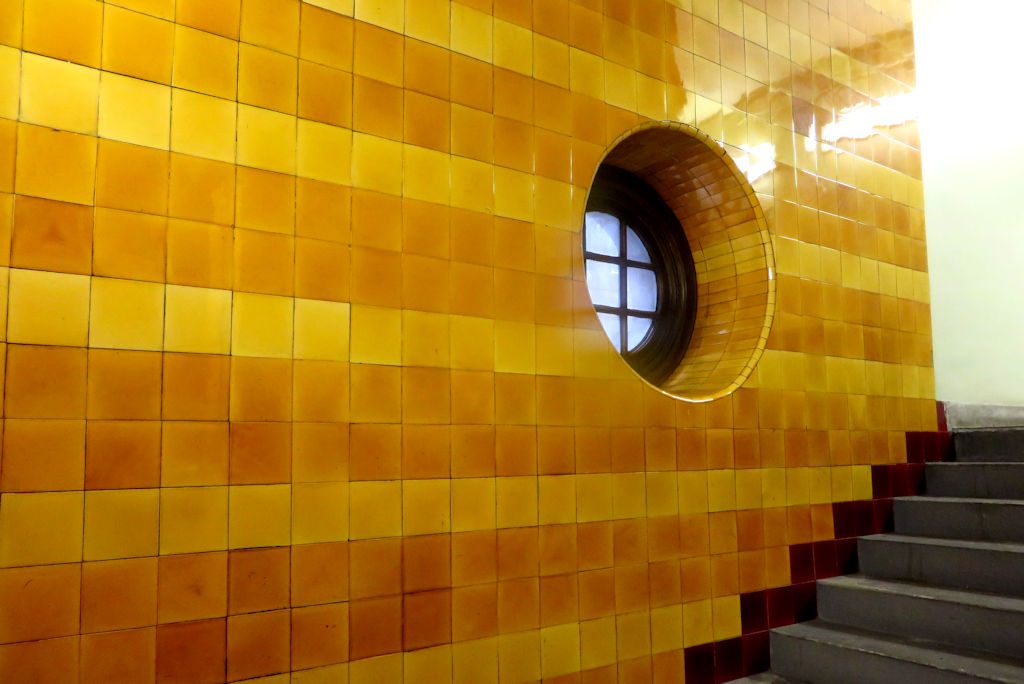 Some of the lower walls of the Edinburgh Library are tiled, as seen here. The rather attractive circular window looks out onto a narrow lane off the Cowgate. 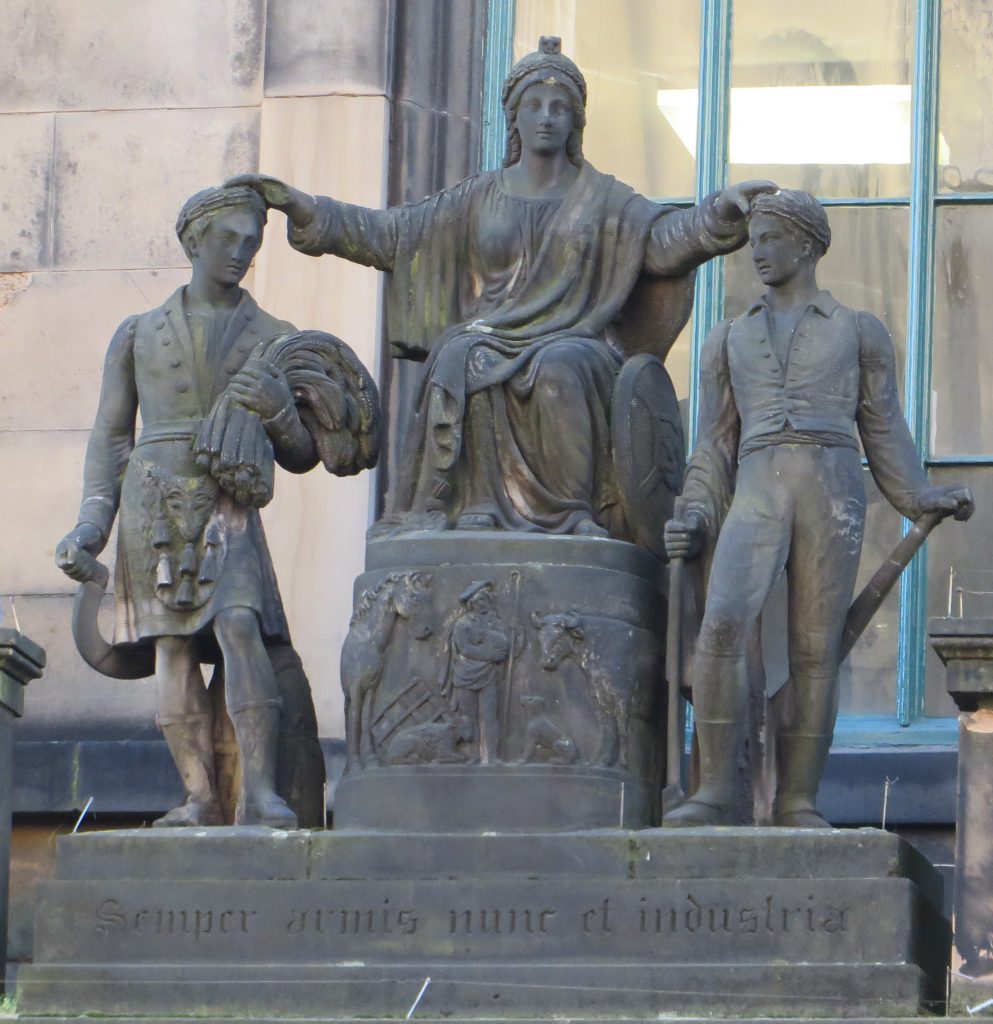 The central figure, seated upon a raised dais, is Caledonia, the female personification of Scotland.  Her right hand rests upon a kilted Highland reaper carrying a sickle and a stoop of corn. Her left hand is placed upon a ploughboy. The dais is decorated with reliefs of a herdsman and farm animals

One of seven large stone figures on the frontage of the National Library of Scotland.

These carved figures are the work of Hew Lorimer, an Edinburgh-born sculptor. The allegorical figures symbolise the achievements of civilisation: Medicine, Science, History, Poetry, Justice, Theology and Music. 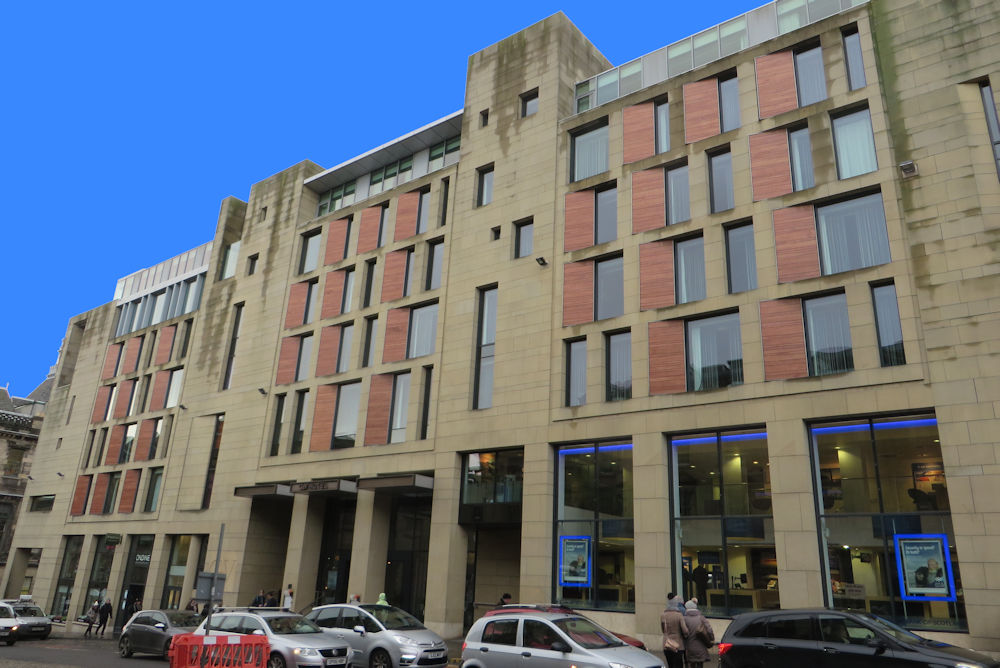 This new building opened in 2009 and houses an hotel, restaurant, pizza parlour and bank. Prior to this there was a 1960s building on the same site and this more modern structure is widely considered an improvement on the building it replaced. 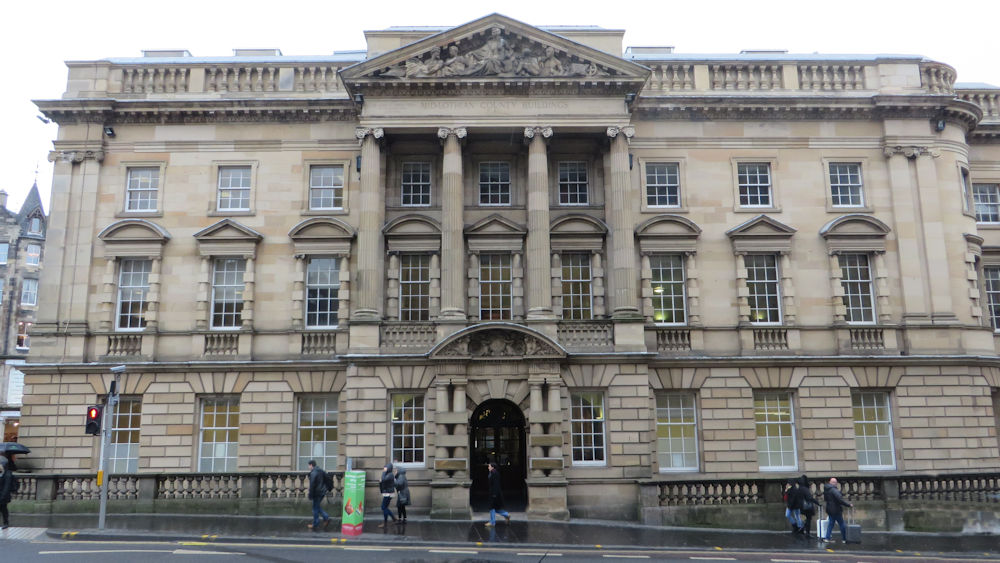 The neo-classical Lothian Chambers was completed in 1905 to serve as the headquarters building of the Midlothian Council.

In 2017 it became the home of the French Institute and is currently being redeveloped internally. 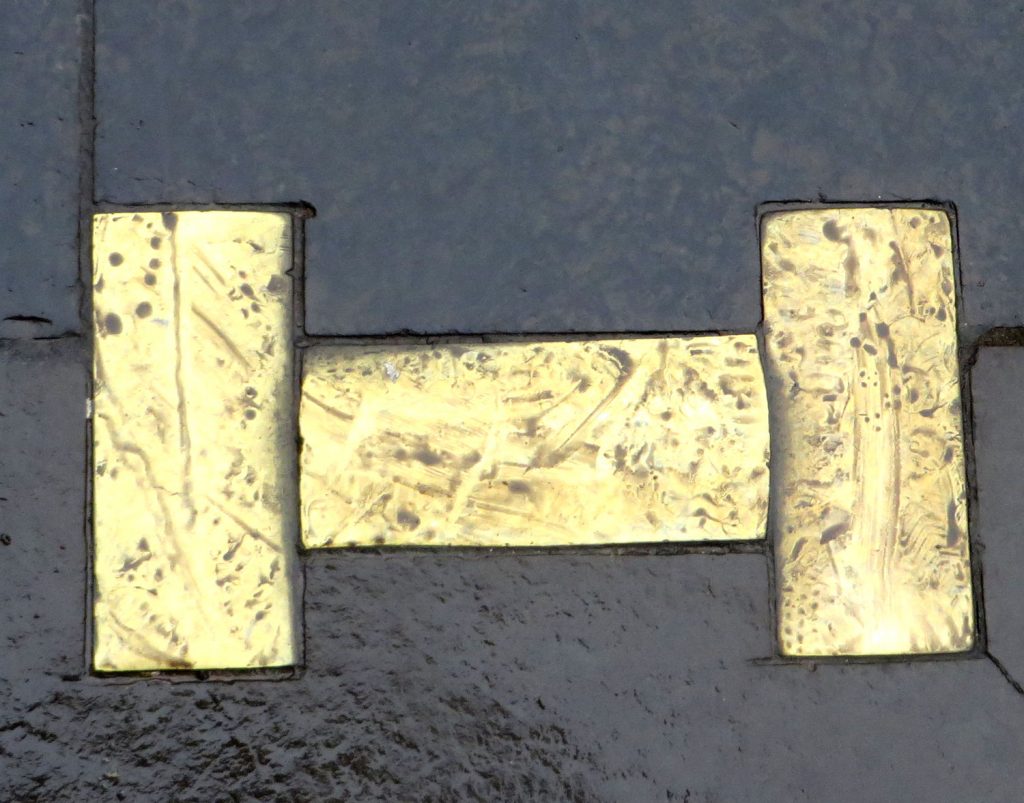 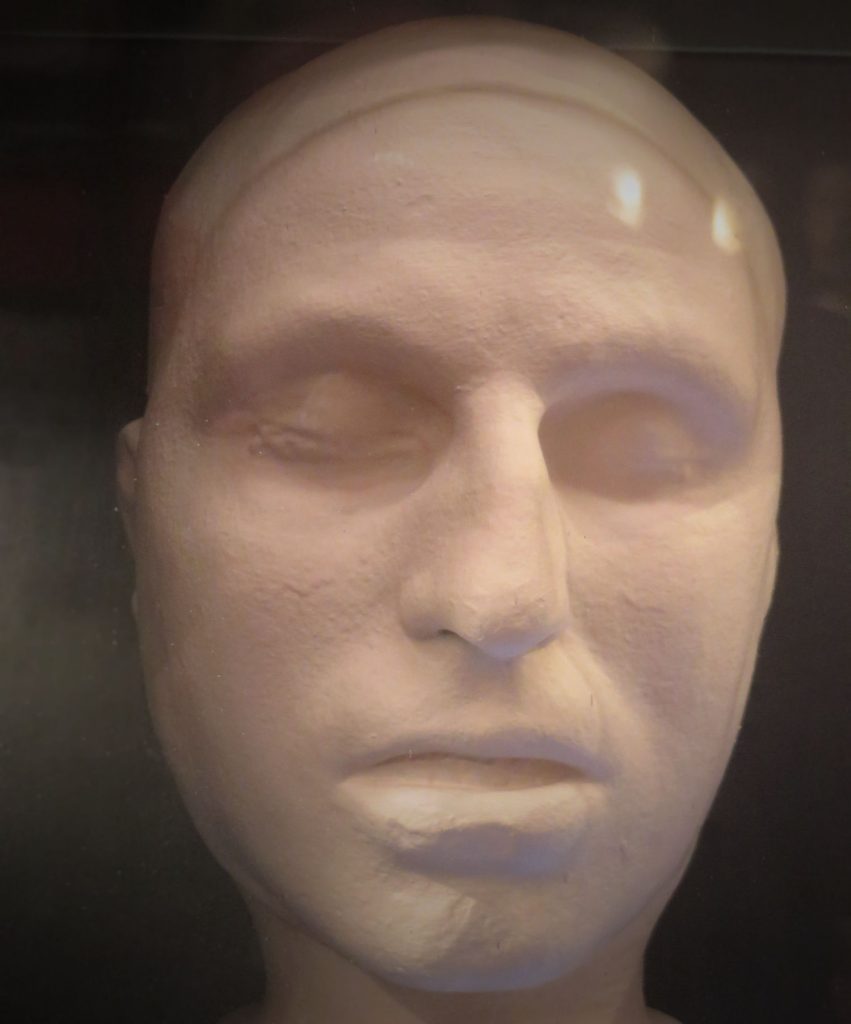 George Bryce, also know as the Ratho Murderer, was the last person to be publicly executed in Edinburgh.

The upper picture shows the brass plates, set in the ground that mark the spot where the execution took place. They represent the uprights and crossbeam of the simple gallows.

The lower picture is the death mask of George Bryce. This is held today in the Scottish National Portrait Gallery on Queen Street, where it can be seen in the library.