We were in St Giles Cathedral this week and noticed this little posy of roses on the tomb of James Graham, First Marquis of Montrose. 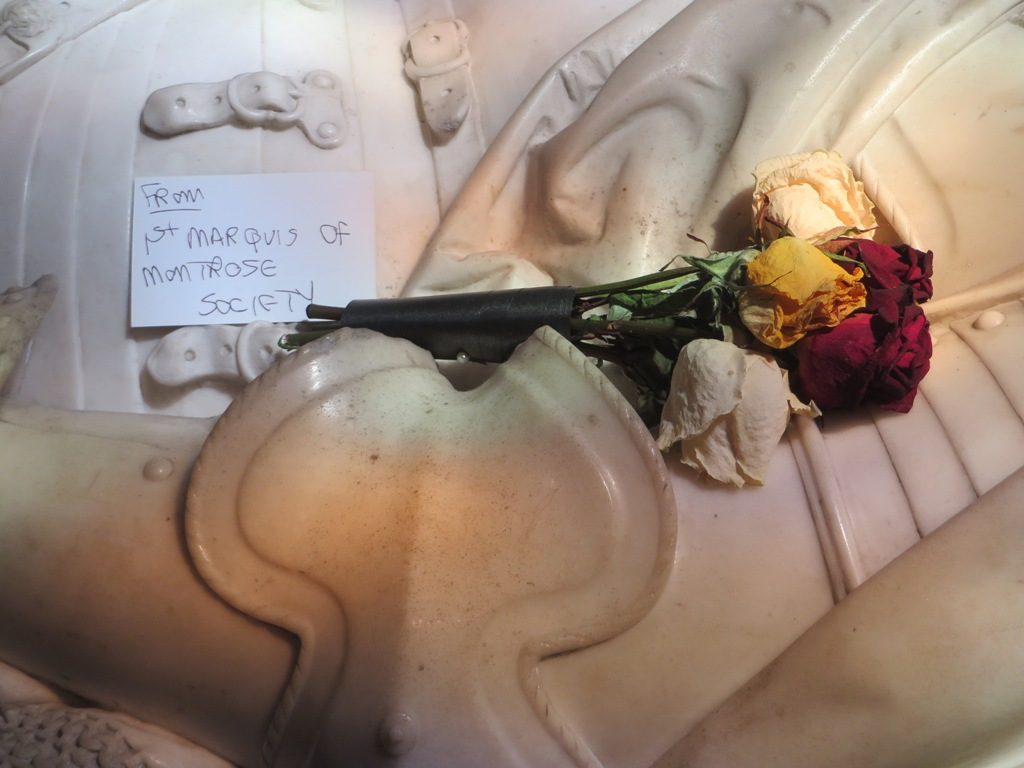 We had a dim recollection that he died in the month of May and presumed that the anniversary of that event had just passed. However, later checking showed that we were only half right. The actual date of his passing was 21 May 1650, so we are just coming up to it.

Montrose is one of the most romantic figures in Scottish history. A man of courage and daring, who stuck to his principles when it seemed all around him were changing their beliefs to promote their own personal advantage.

James Graham was born in 1612 into a great family that had played a part in Scottish history for many generations. Grahams had fought alongside William Wallace and Robert the Bruce and had died at the side of James IV at the Battle of Flodden.

In the great religious and political upheavals of the seventeenth century, Montrose had been one of the first signatories to the National Covenant, signed in Greyfriars churchyard on 28 February 1638. When the King Charles I attempted to impose an English prayer book and a form of English Presbyterianism – rule by bishops, rather than members of the church – on the Scottish people, Montrose led an army against him and through clever strategic moves forced Charles to the negotiating table.

Although he had fought against him, Montrose still recognised Charles as the rightful king. He no doubt thought he was a bad king but bad kings could be reformed by good advisors. Montrose saw that other men sought to take previously royal powers for themselves. This he believed was a far greater threat than an ill-counselled king. Chief among these was Archibald Campbell, Earl of Argyll. Along with seventeen other Scottish nobles he signed the Cumbernauld Bond, a document that affirmed loyalty to both the Covenant and the King and rejected the machinations of Argyll. It was an ill-judged move. Argyll was already too powerful and when the signatories were betrayed to him, he arrested Montrose and had him imprisoned as an enemy of the state.

James Graham spent five months in prison in Edinburgh, time that Argyll used to ransack his houses and terrorise his followers in an effort to find evidence of treason that would have led to his execution. Nothing was found and Montrose was released as part of a general amnesty.

For a few brief months Montrose was able to live in peace with his wife and children. However, it would not last. When civil war broke out in England in 1642 it was inevitable that Scotland would be dragged in as well. Argyll and his followers drew up a new document, the Solemn League and Covenant. When the English Parliament signed it tied Scottish church reform to English republicanism. One could no longer support both King and Kirk.

Montrose left Scotland in November 1643 and went to Oxford to speak with King Charles. Three months later, Charles raised him from an earl to a full marquis and appointed him Lieutenant General of the King’s Forces in Scotland. Montrose would now fight his former Covenanting comrades.

For a year he cut a swath across the Highlands, often inflicting defeats on superior forces but in truth the end was inevitable. The Royalist forces were trapped and beaten and Montrose fled abroad.

On the continent he continued to try and raise forces to return to Scotland and carry on the fight. He toured cities from The Hague to Paris, Krakow, Prague and Brussels. However, Argyll let it be known that he was negotiating with Charles and Montrose found that, despite his commission from the king, he lacked credibility with those who might have helped him.  While he was engaged in this work he heard that King Charles I had been executed by the English Parliament. The shock was so great he fainted and locked himself away for two days.

Back in Edinburgh, the news of Charles’ death had sent similar shockwaves through the Scottish Parliament. Charles had also been King of Scotland and they had not agreed to his beheading. Argyll saw his chance. He wrote to the Prince of Wales in exile in The Netherlands and offered to recognise him as King Charles II if he would return to Edinburgh. However, he would have to agree to the terms of the Solemn League and Covenant, repudiate his father and mother and renounce Montrose. If he accepted these terms he would in effect be a puppet king under the control of Argyll. Montrose advised Charles to reject the offer and to raise a new army that would continue the fight. Charles knew that if he followed this advice and was then beaten, he risked losing everything.

Charles II decided to follow a similar course to his father. He appeared to support Montrose while at the same time talking to Argyll. In May 1650, Montrose set off to return to Scotland. The country was firmly under the control of Argyll who had put a price of £30,000 on his head, so he must surely have known that his chances of success were slim; however, his sense of honour told him it was the right thing to do.

He established a base in Orkney, close enough yet safe from direct assault. In early April 1650 he crossed the Pentland Firth with a force of Danes and Orcadians, intending to make for Inverness. They stopped at Carbisdale, in Strath Oykel where they arranged they would meet with reinforcements from the Monroe and Ross clans. Here they were found by a force of Covenant cavalry who charged the camp. The Orcadians simply fled and the arriving Rosses and Monroes, seeing this, promptly changed sides and attacked Montrose’s remaining troops. Montrose escaped and made his way to the castle of Neil MacLeod at Ardvreck on Loch Assynt.

MacLoed took him in but then sent word that they had arrested him and claimed the £30,000 reward. When Montrose realised what had happened he told MacLeod to kill him on the spot, rather than hand him over to enemies. However, MacLeod wanted the money and handed him over. In the Highlands, the name of Neil MacLeod is thus forever associated with treachery. The poet Iain Lom would write:

You are a stripped branch of the perfumed apple tree

without  fruit or honour or comeliness, ever engaged in

murdering one another you are the leavings of  sword

thrusts and dirks. The death should be about you,

despicable one, for you have sinfully sold the truth for

Leith meal, most of which had gone sour.

Montrose was taken to Edinburgh. There would be no trial, for parliament had already decided what his fate would be. He was brought into the city via the Watergate and then paraded up the Canongate tied to a cart, driven by the hangman. Argyll was at Moray House to see his old enemy brought low but it is said that Montrose looked him straight in the eye and Argyll retreated back into the house. Parliament had hired women whose husbands had been killed in the war to throw stones at him but his quiet dignity made this impossible and instead, they turned away.

He was imprisoned in the Tolbooth where his guards took delight in tormenting him, preventing him from sleeping and blowing tobacco smoke into his cell, as they knew he hated smoking.

On Monday, 20 May he was taken to Parliament House to hear sentence pronounced. He would be hanged, beheaded and quartered with his limbs displayed over the gates of Perth, Aberdeen and Stirling; sentence to be carried out next day.

On the morning of May21, 1650 he walked the short distance to the scaffold. He spoke to the crowd saying, “I shall pray for you all. I leave my soul to God, my service to my prince, my goodwill to my friends, and my name and charity to you all. May Almighty God have mercy on this afflicted country.”

It was the end of Montrose but not the end of his story. In 1660, Charles II was restored to the throne. At last he knew who his friends were, and who his enemies. On Saturday, 11, May 1661 a great state funeral was held in Edinburgh. The reunited body of James Graham, first Marquis of Montrose was laid to rest in the High Kirk of St Giles.

It was this anniversary that the bouquet commemorated. One man who did not attend was Archibald Campbell, Marquis of Argyll. He was imprisoned in Edinburgh Castle.  Two weeks later, his head would be displayed on the spike above the Netherbow recently vacated by Montrose. 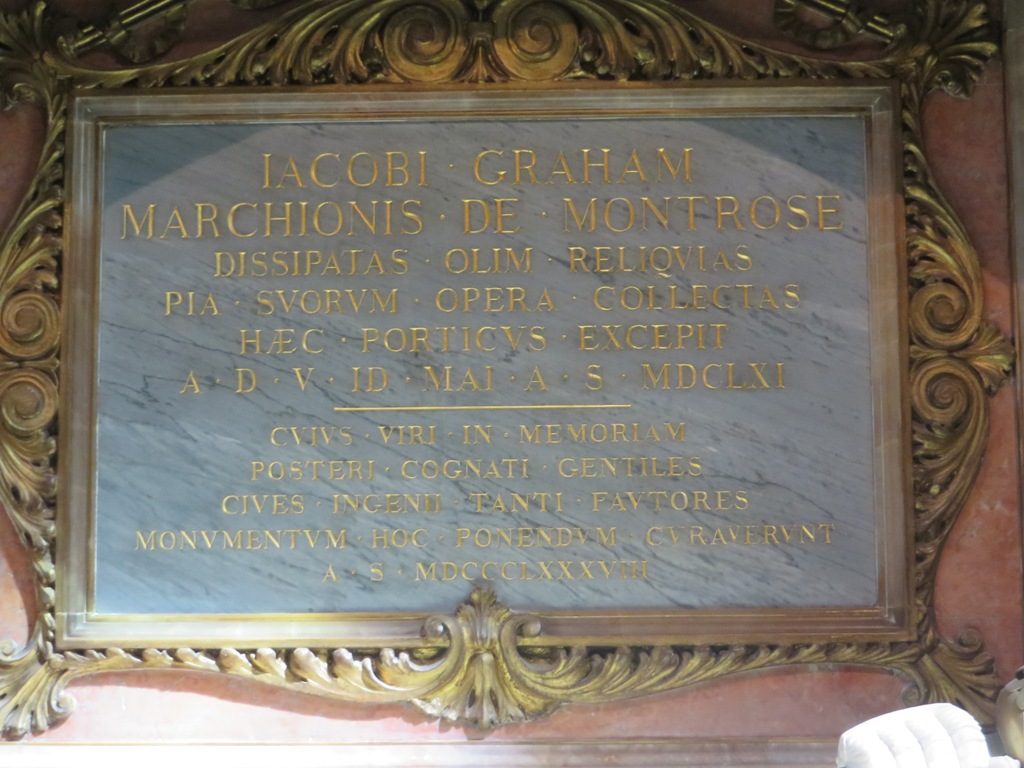